On April 2, 2014, 2nd Lt. John M. Arroyo, Jr. was shot in the throat and neck by another soldier who then went on to kill four soldiers, including himself, and wound sixteen others. In this interview, John shares some of the many miracles that took place that day and in the months ahead to preserve his life.

About the Book:  This is the amazing story of 2nd Lt. John M. Arroyo, Jr., who, on April 2, 2014, was shot in the throat and neck by another soldier who then went on to kill four soldiers, including himself, and wound sixteen others.

It tells of John’s journey from his childhood in Southern California to his time spent as a tattooed member of a violent street gang, and a hopeless teenage drug addict. He enlisted in the U.S. Army and ultimately became a Special Forces Green Beret and highly decorated officer after serving two tours of duty in Afghanistan and one in Iraq.

This story of the journey to the very edge of overwhelming darkness includes the story of his brave, supportive wife, Angel. Often overlooked, military spouses have a unique and powerful role in the lives of the U.S fighting forces.

Be inspired by this story as John uses his faith to protect himself and his fellow Special Forces “Operators” while deployed to the Middle-East and then relies on it to recover from the massive wounds he sustained after being shot at Fort Hood, Texas 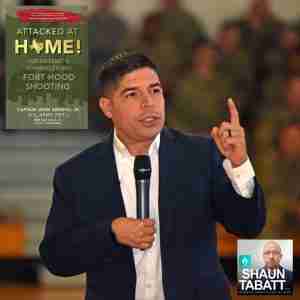 Get your own copy of Attacked at Home!: