Welcome to The Shaun Tabatt Show! Today I speak with inspirational speaker, comedian, and renowned presidential impersonator John Morgan about his helpful new book War on Fear: What Would You Do If You Were Not Afraid?. 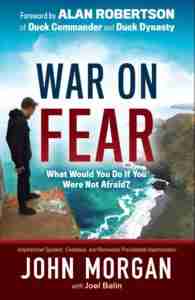 About the Book:  Imagine the possibilities of a life without fear! What will you do? Where will you go? How will your life change as you go from living with fear to thriving full of courage? Rise up to cower no longer and embrace the adventure you were created for.

War on Fear equips you step by step and weapon by weapon to defeat fear. Author John Morgan shares his struggles with fear and how he decided to get angry and fight back. With guidance, laughter and courage Morgan invites you to join him in the battle.

Make the decision today to win the war on fear.

About the Author:  John Morgan was born and raised in Orlando, Florida. He and, his wife of 29 years, Kathy, still reside in sunny Orlando with their four sons, two wonderful daughters-in-law, and three exciting grandkids. He is known for his comedic performances as presidential impersonator of President George W. Bush. 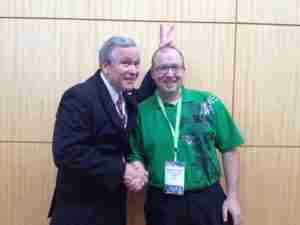 Discovered at a “Bush For President” rally in 2000, Morgan went from selling appliances to performing at the President’s Inaugural. By 2007, John was bringing his big- time comedic impersonation to arenas all across America, appearing live before tens of thousands on Sean Hannity’s “Freedom Concerts” and before hundreds of thousands on “The Winter Jam Tour Spectacular,” where he amazed audiences with his guitar playing and singing.

John’s inspiring journey is chronicled in his first book My Life as a Bush…and My Heart for Imitating Jesus, with forward by Governor Mike Huckabee, filled with laugh-out-loud stories, audacious encounters, and spiritual insights.