Welcome to The Shaun Tabatt Show! Today my special guest is Jean Watson and we’re talking about her album Steady My Gaze. 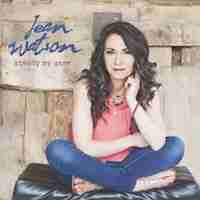 About The Album:
Steady My Gaze features an abundance of Celtic-infused violin, Watson’s signature haunting vocals, along with the special treat of stellar fret-work from master guitarist, Phil Keaggy and guest vocals from Tree63’s John Ellis!

About The Artist:
Internationally acclaimed singer/songwriter and classically trained violinist Jean Watson delved into the Christian recording world in 2003. During a time of great brokenness in Jean’s life, her landlord accidentally heard her sing and donated money to make her first CD! She gave the CD away to anyone who would listen and soon was singing and speaking in churches, coffeehouses, homeless shelters, and prisons, sharing the story of how God was transforming her life.

Since that time, Jean’s voice and testimony of God’s grace and healing have touched thousands of lives around the world. She has recorded seven albums to date including her latest CD, Steady My Gaze featuring Grammy nominated producer Billy Smiley, guitar virtuoso Phil Keaggy, and John Ellis of ‘Tree63’.

Jean’s musical style is eclectic and features an abundance of celtic-infused violin and Watson’s signature haunting vocals. She has been honored four times as the Best Female Praise and Worship Artist USA by the UK Christian Music Alliance. Watson can be heard worldwide on UCB Radio Ireland where she hosts a daily inspirational radio show. Watson has appeared on The 700 Club, TBN’s Praise The Lord, Cornerstone Television Network’s flagship show, Real Life, LeSea TV’s The Harvest Show, CTN’s Bridges and many more media outlets across the globe.

Though her ministry is now international, Jean is still passionate about bringing hope to the hopeless through words and music. Having performed in majestic cathedrals and grand concert halls, her favorite venues are still homeless shelters and prisons. When she is not traveling, Jean enjoys playing violin in the Kalamazoo Symphony, spending time with her family, and riding her horse, Rosie.

Join the Conversation:
Half the fun of doing these podcasts is the conversation that happens around them. With each episode, I’ll be asking a new questions. Here’s my question for episode 32:

Question:  Have you listened to Steady My Gaze? Which song is your favorite and why?