It’s an honor to welcome my friend Warren Marcus to The Shaun Tabatt Show to share about his new book The Priestly Prayer of the Blessing: The Ancient Secret of the Only Prayer in the Bible Written by God Himself (Charisma House, 2018). 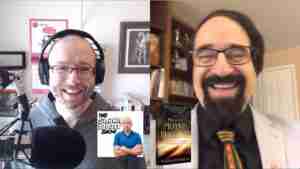 About the book:  In 1979 at an archaeological site southwest of the Old City of Jerusalem, opposite the Temple Mount (adjacent to St. Andrew’s Church, now on the grounds of the Menachem Begin Heritage Center) Jewish archaeologist Gabriel Barkay discovered two tiny silver scrolls, inscribed in the Ancient Paleo Hebrew with portions of the well-known “Priestly Blessing” from the Book of Numbers. These amulets were found in a burial chamber and was most likely worn around the neck of the High Priest of Israel.

The delicate process of unrolling the scrolls while developing a method that would prevent them from disintegrating took three years. They contain what is the oldest surviving texts from the Hebrew Bible, dating from a time immediately prior to the destruction of Jerusalem by the Babylonians in 586/7 BCE. These are far older than the Dead Sea Scrolls.

Why is it that the One True God of Israel saw fit to see this particular “Ancient Prayer of the Priestly Blessing” to be preserved as the oldest evidence of Biblical Scripture? Could it be that this prayer, the only prayer written by YHWH Himself was not just to be proclaimed over the Children of Israel in Moses times or does YHWH want this prayer proclaimed over believers today?

Though the Priestly Prayer of the Blessing written in our Bibles remains a beautiful prayer, the full meaning as contained in the Ancient Hebrew has been translated into the Amplified Hebrew to English and the full power and impact of this prayer can be fully realized and experienced.

Learn more about the powerful meaning of this prayer and learn how to have it proclaimed over you in a way which will bring you everything you would ever need to walk in supernatural health, protection and the power and authority to fulfill your God-given destiny! 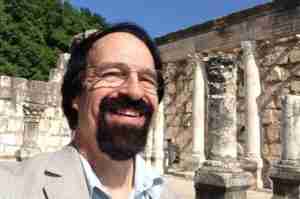 About the Author:  Warren Marcus is an Author, Filmmaker, TV Producer and Speaker and ordained Messianic Jewish Minister.

In 1980’s, Warren was ordained in the Southern Baptist denomination as a Messianic Jewish Minister. Ever since his salvation in 1974, Warren became an avid student of the Word of God. His desire has been to better understand the unity of scripture contained in the entire Word of God from Genesis to Revelation. His heart is to help the body of Messiah understand the Jewish Roots and foundation of the New Covenant.

The God of Israel has imparted to Warren many profound insights from the Holy Scriptures that have impacted the lives of those who have heard his teachings. He has been writing and recording the things that GOD has revealed to him, so that many might be able to enter into a deeper personal and supernatural relationship with the Most High God of Israel, YAWEH our ELOHIM.

Warren was born on November 20, 1949 to a Jewish father and mother and was brought up in the Conservative Jewish Faith. As a 5 year old boy he had a life-changing dream where he was transported into heaven and he stood in the presence of the Shekinah Glory of the One True God of Israel. He heard the voice of YHWH (YAWEH) inside and all around him saying, “Do not be afraid. I am your friend. I will never hurt you.” This dream was so profound that it propelled him into a search for discovering more about the GOD he had encountered.

As a 8 year old, Warren’s mother took him to see the motion picture by Cecil B DeMills, “The Ten Commandments.” In the film, when Moses received the Ten Commandments from GOD, Warren told his mother that the image of God which Moses encountered (the Shekinah Glory) was exactly how GOD revealed Himself to Warren in his dream as a five-year-old boy.

Then Warren went to see the motion picture, “Ben Hurr.” It was here where Warren found out about the belief of a Jewish Messiah. He was drawn to the person of Yeshua (Jesus) and asked his mother, “Is Jesus a real person?” His mother responded, “No, it’s just a story.”

But Warren continued to pursue his relationship with The One True God of Israel. Warren was so deeply inspired and affected by these motion pictures planted deep inside of him was the desire to become a Filmmaker who would someday produce motion pictures that would communicate what the One True God of Israel wanted to say. At 12 years old, Warren bought motion picture equipment with financial gifts given to him from his Bar Mitzvah. He began writing, shooting, and editing short movies.

Upon graduating Linden High School he attended the School of Visual Arts in NYC and studied the art of filmmaking. Upon graduating, he began a career on Madison Avenue using his craft to produce, direct, shoot and edit TV Commercials. He continued writing feature film scripts which he hoped to one day produce.

On October 3, 1974 Warren became a believer in Yeshua (Jesus) as the promised Jewish Messiah. He made a covenant with GOD to devote his entire life to using his filmmaking and TV production skills for ministry.

He began to see the fulfillment of this covenant when he went to work for CBN, the Christian Broadcasting Network. There he produced the animated Bible series for children, “SuperBook” and the “Flying House” which has been translated in manifold languages and has been distributed worldwide. He also produced the highest rated religious prime time TV Special of all time, “Don’t Ask Me, Ask God!” This included secular movie stars, Vincent Price, Michael J Fox, Tony Danza, Steve Allan, Ned Beatty, Norman Fell and so many more. It garnered a 10.5 Neilson Rating with an audience of over 16 million people watching. More amazing is that over 114,000 people wrote in to share their testimony of accepting Jesus as their Lord and Savior while praying with host Pat Robertson at the end of the program.

Warren has been used to produce inspirational TV Programs for Dr. Jerry Falwell’s “Liberty Broadcasting Network” and worked with The Inspiration Network in Charlotte, North Carolina. He has served as the Executive Producer of Sid Roth’s “It’s Supernatural” weekly TV Program paying special attention to the Dramatic Reenactments that help bring to life the testimonies of real people’s encounters with the supernatural of God.

Get your own copy of The Priestly Prayer of the Blessing: