Earlier in the week I invited my daughter Amelia to be my guest host for our talk with Jon Erwin about his new film I Can Only Imagine. Head to your local theatre this weekend and show your support.

About the Film:  It’s the song that brings ultimate hope to so many … often in the midst of life’s most challenging moments. Amazingly, the song was written in mere minutes by MercyMe lead singer Bart Millard. In reality, those lyrics took a lifetime to craft.

Although he found faith at a young age, life wasn’t easy for Bart. He leaned into an active imagination and his love of music as escapes from a troubled home life. As he grew older, Bart turned to football in hopes of somehow connecting with his abusive father. But a career-ending injury—combined with the vision of a teacher who saw unlimited potential—set Bart on a musical pathway.

Chasing a dream while running from broken relationships with his father and Shannon, his childhood sweetheart, Bart hits the road in an old, decrepit tour bus with his new band MercyMe—named for his grandmother’s favorite expression. With the guidance of a grizzled music-industry insider, the band begins a journey none of them could ever have imagined.

A gripping reminder of the power of forgiveness, I CAN ONLY IMAGINE beautifully illustrates that no one is ever too far from God’s love—or from an eternal home in Heaven. 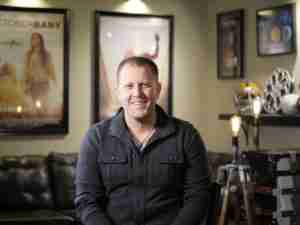 About the Erwin Brothers: JON and ANDY ERWIN are a directing team that focuses on creating faith-based and inspirational feature films. The duo began their career as teenagers, working as camera operators for ESPN in their hometown of Birmingham, AL. They soon embarked on full time careers as sports cameramen covering University of Alabama games all over the country. The brothers had the opportunity to work with ESPN College Football Primetime, FOX NFL, and the NBA covering events like the XGames and the Superbowl.

In 2002, the Erwin Brothers started their own production company. They ventured into creating commercials, documentaries and music videos. They found their greatest success in the world of music. Soon they were directing music videos and producing concerts and television programs for platinum artists like Amy Grant, Michael W. Smith, Casting Crowns, Switchfoot, Skillet, and others. The brothers received 11 nominations and were honored with wins for Music Video of the Year at the GMA Dove Awards for three consecutive years.

In 2010 the Erwin Brothers shifted their focus and began exclusively developing dramatic feature films including OCTOBER BABY, MOMS’ NIGHT OUT, and WOODLAWN. I CAN ONLY IMAGINE is the brothers’ fourth feature film, and is based on MercyMe’s #1 hit song of the same title.