Here’s another great episode pulled from the Author Talks with Shaun Tabatt archives. This time around it’s my talk with Robby Dawkins about his transformational book Do What Jesus Did: A Real-Life Field Guide to Healing the Sick, Routing Demons and Changing Lives Forever (Chosen Books, 2013).

About the Book:  The things Jesus did are not just for Bible times. They are for today. For everyone. Chicagoland pastor Robby Dawkins sees this again and again in his ministry to hurting people and even to gang members. Everyday people are seeing God’s power unleashed through simple faith in God’s Word; they are healing the sick, routing demons, and making a dynamic impact for the Kingdom of God.

But many other believers are missing out, unaware that they have far more power and authority than they realize.

Dawkins shares dynamic, real-life instruction and amazing stories from the front lines of ministry, showing that believers carry the authority of the Son of God and the power of the Holy Spirit wherever they are. When we walk in the presence and authority of God, we will do what Jesus did. 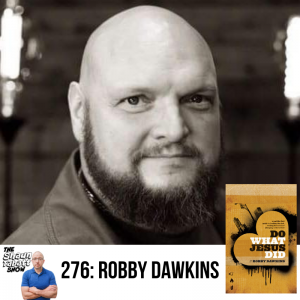 About the Author:  Robby is a fifth-generation pastor who was born to missionary parents in Japan. Robby had an early start in ministry. In his father’s church, he began a children’s ministry at the age of 12, and became the youth minister at 16 years old. Robby says, “I knew from a young age that God had called me into ministry. My parents say that from the age of 2, I told people that I would grow up and be a missionary.” In many ways that has been the case in Robby’s life.

Robby and his wife Angie have been married for 25+ years and have 6 sons. He served as a youth pastor for 12 years for churches between 50 to 14,000 members before he and Angie planted a Vineyard church in the downtown area of Aurora, Illinois (Chicago area) in 1996. 70% of their church came to Christ at their church and 60% of that through Power encounters (Prophetic, Healing, Deliverance or ministry of God’s manifest presence). The mayor of Aurora along with its chief of police bestowed upon Robby and the Church an acknowledgment that he and the church made a significant difference in Aurora’s crime rate reduction.

Robby also ministers extensively as a conference speaker and a passionate Church equipper (in the U.S. and in 53 countries) equipping in Power Evangelism. He was most recently featured in the movies “Furious Love” in 2010, “Father of Lights” in 2012, “Holy Ghost Reborn” in 2015. His book “Do What Jesus Did “was released in June 2013 and is on several Best Sellers lists in the UK, US and Europe. He then added “Identity Thief”, which was released in October 2015.  His most recent book “Do Greater Things” was just released on January 1, 2018. He has been featured on Sid Roth’s “It’s Supernatural”, “Today with Marilyn and Sarah”, as well as other programs on TBN, TBN UK and GOD TV. Robby is also a contributing writer for Charisma Magazine.

Get your own copy of Do What Jesus Did:

© Shaun Tabatt and ShaunTabatt.com, 2019. Unauthorized use and/or duplication of this material without express and written permission from this site’s author and/or owner is strictly prohibited. Excerpts and links may be used, provided that full and clear credit is given to Shaun Tabatt and ShaunTabatt.com with appropriate and specific direction to the original content.